We helped a founder change youngsters' financial mindset in her country 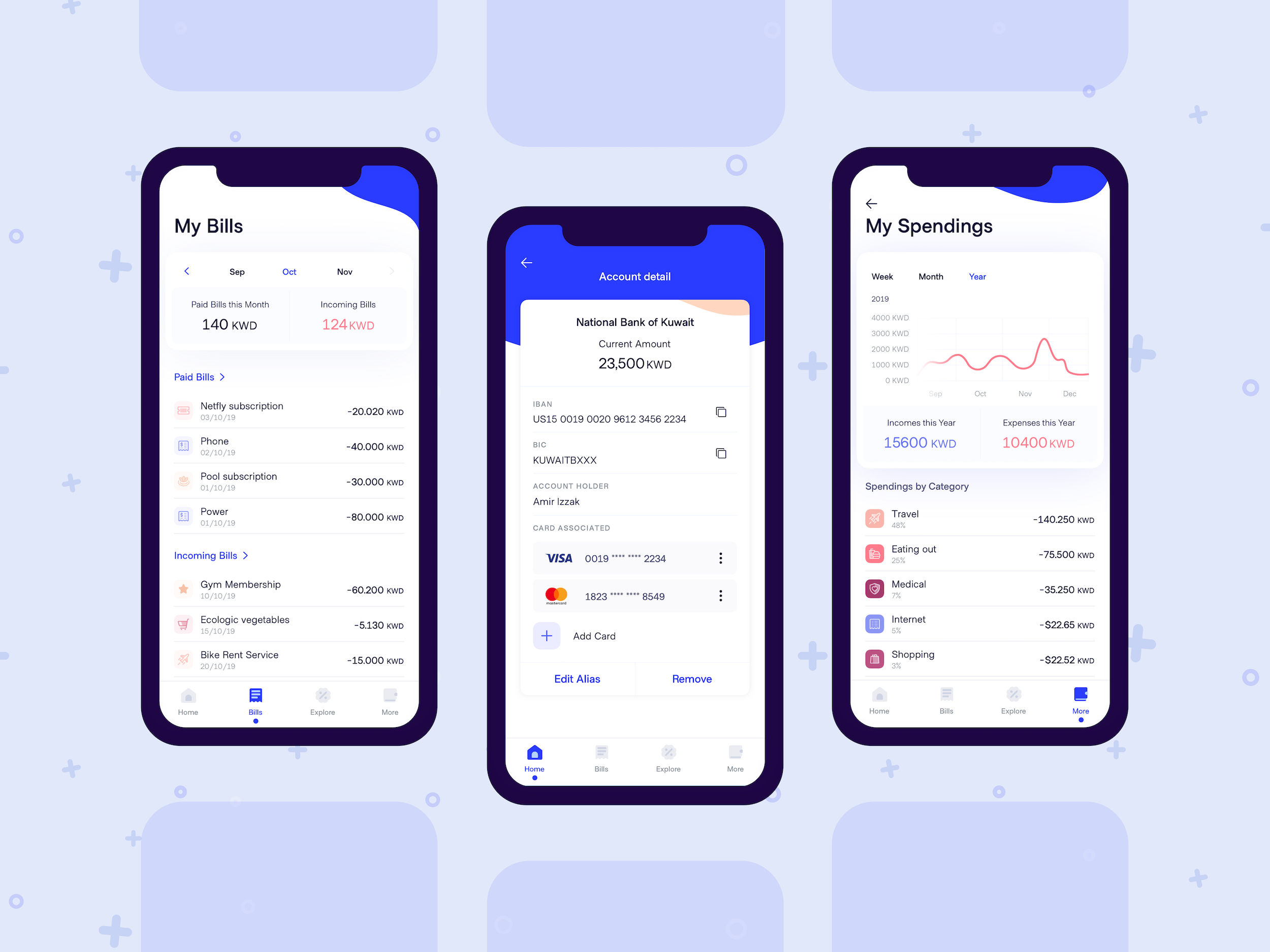 Dalal Alrayes, co-founder of the startup Spare, is a brave woman entrepreneur who we worked with to design a smart and safe digital product to radically change the way young people interact with their finances in Kuwait.

Although Kuwait likes to present itself as one of the most advanced democracies in the Persian Gulf, the truth is that its own recent past and its present challenges this claim. Dalal Alrayes, an entrepreneur from this country and head of Spare, an app designed to give everyone the power to be smart with their money, knows all about it. In her culture, women simply do not usually hold positions of power. She wanted to change things.

After spending years abroad and experiencing products and services in the financial space as well as apps that make people's lives easier, she felt it was about time she brought some of those efficiencies back to her country. She started working on Spare at the end of 2017 and the journey has taken her across different countries in the region and through many ideas, trials, and errors. Their values are simple: Inclusion, perseverance, and reliability. All this with the purpose of providing smart, simple, and innovative tools which support everyone in achieving their financial goals. When we at Z1 met Dalal, we knew we wanted to partner with this brave entrepreneur.

According to Dalal, Spare came from a need that she and her co-founder personally had for something that could help them organize their money: “Saurabh Shah and I both have backgrounds in finance, yet we didn’t find tools that work in Kuwait to keep our money in order.  Although there are apps and web portals from the banks, we needed something that could do a lot more for us and was easier to use. We are exposed to beautiful, seamless apps from around the world every day and we wanted to have the same type of experience, with our finances, here in Kuwait”.

After spending years abroad and experiencing products and services in the financial space that make people's lives easier, Dalal felt it was about time she brought some of those efficiencies back to her country.

When they approached Z1, they had already built a prototype but they were not happy with the design and the general user journey.  “We needed users to feel comfortable and secure while being delighted by our app and Z1 helped us achieve exactly that”. Not only that, but for us it was important to help them set a solid base to build on. “The product we worked on has expanded since then and we are now building new, exciting features in payments in addition to the original saving and budgeting tools we started with”, Dalal says.

When it comes to partnering with Z1, Dalal has no doubts: “We loved the whole process of giving the app a facelift. We connected with Z1 designers in terms of style, their focus on tech startups, and how easy and friendly the team was to work with.”

Spare’s team and Z1’s designers had to think about ways to make the user feel smart, happy, and—crucially—secure while using the app. “The Z1 team was always available to discuss ideas and the process was collaborative, with the team sharing knowledge of best practices and how other great apps worked. We are extremely happy with the outcome and still refer back to the work and designs whenever we put together new features or screens.”

“We needed users to feel comfortable and secure while being delighted by our app and Z1 helped us achieve exactly that.”

According to Z1’s designers Lucía Guillén and Irene Utrilla, from the beginning it was very easy to work with Dalal because of her closeness and decisiveness. “For our team, it is always a pleasure to collaborate with women at the forefront of exciting projects like this,” Lucía celebrates. We focused on a straightforward design that would help the user categorize their expenses by color. “We wanted them to identify at first glance where they were spending their money, whether on purchases, travels... We used blue for the most moderate expenses and red for the most expensive ones. We took great care of iconography and colors to see the expenditure per year, and we created a design system to make developers’ lives easier.”

A huge opportunity for fintech players‍

Not everything was as easy as the collaboration with our team. On this journey, Dalal and her contributors encountered a few obstacles. They found a very closed system of public companies and power elites. Across the world, people have completely transformed how they manage and spend money thanks to the rapid innovation in the banking and finance sector via new technologies, fintech companies, and massive investments.

Fintech in the GCC region still lags the rest of the world but presents a huge opportunity for players across the fintech value chain.  At Spare, they are working on raising the level of financial savviness and knowledge while also making people’s daily interactions with their money smoother and more efficient.  “Today, what we’re really excited about is the rollout of open banking in the region.  Open banking will allow individuals to share and use their bank transaction data in a secure, standardized form outside of their banks, and in return receive a variety of products from financial companies, like Spare, that improve their experience with their finances.  Connecting a bank account to a third-party application with improved services and UI/UX  is now common in Europe and the US, and we can’t wait to lead this change in our region too”.

One of the main problems they face in Kuwait is the absence of a saving culture, with more than 60% of people (according to Spare's survey) considering themselves more spenders than savers. When it comes to how they manage their finances, most resort to the basic method of monitoring their accounts, while others don’t even worry about managing their spending at all.  “With the lack of accessible, easy-to-use financial tools, we aren’t surprised that people we’ve spoken to have expressed that personal money management to them was vital, but messy, hard, and please help!!  At Spare, we believe that everyone deserves a better experience with their money and we continuously seek out solutions to deliver on that belief”.

Yes, a woman is in charge‍

Growing up, Dalal had examples all around her of strong women in the workplace.  For 20 years, her mother was the head of the pension contributions division at Kuwait's Public Institution for Social Security, and her drive and impact have always been an inspiration for her.

"In fintech specifically, there are fewer companies with females on their founding teams, however, we are starting to see this change and hope to encourage more to enter the field."

In Kuwait, and in the region in general, they are finally seeing the social landscape change when it comes to founders, with more women leaving their stable corporate jobs to pursue something they are passionate about or try to solve a problem they’ve faced or that existed around them.  “In fintech specifically, there are fewer companies with females on their founding teams. However, we are starting to see this change and hope to encourage more to enter the field.  “Being outnumbered has its challenges, so it’s been helpful to have a strong team and also a solid support network from my family and other female founders in Kuwait”, she adds.

The timid rise of open banking

Other difficulties they found launching Spare were related to getting users to connect their bank accounts to Spare.  To operate in any market, a company needs to have API connections available from the banks that allow users to link their accounts.  This generally is possible in markets where an open banking policy is mandated by the central bank, like in Europe, UK, Singapore, and others.

Under open banking, banks allow third-party providers, like Spare, to securely access customer data and build products and services that benefit users.  “In the GCC region, open banking is currently only available in Bahrain, and that’s why we are launching Spare there this year. Open banking will also be available in Saudi Arabia starting 2022, and Kuwait is working on its mandate”.

At Spare they are already collaborating and working directly with banks and regulators through their fintech sandboxes. They believe this will help their product significantly in gaining the trust of users who have only had experience managing their finances directly within their banks.

People who have used Spare so far have provided great feedback. Their beta testers were surprised by the information they were getting about their spending habits and they loved the user experience and the UI of the app, rating it as “a refreshing change from what usual financial interactions are like”.

“We were quite happy to see that there was a high level of uptake for the Arabic version of the app as well. Our early testers asked for more features such as custom categories for their spending and the ability to separate transactions conducted by their spouses. We’re incorporating some of the ideas into our product roadmap.” The Spare team is testing their new features in Bahrain with individual users as well as businesses. They are actively collecting feedback and iterating to pursue their mission of raising people’s level of financial knowledge, and their belief that everything related to money should be way easier.