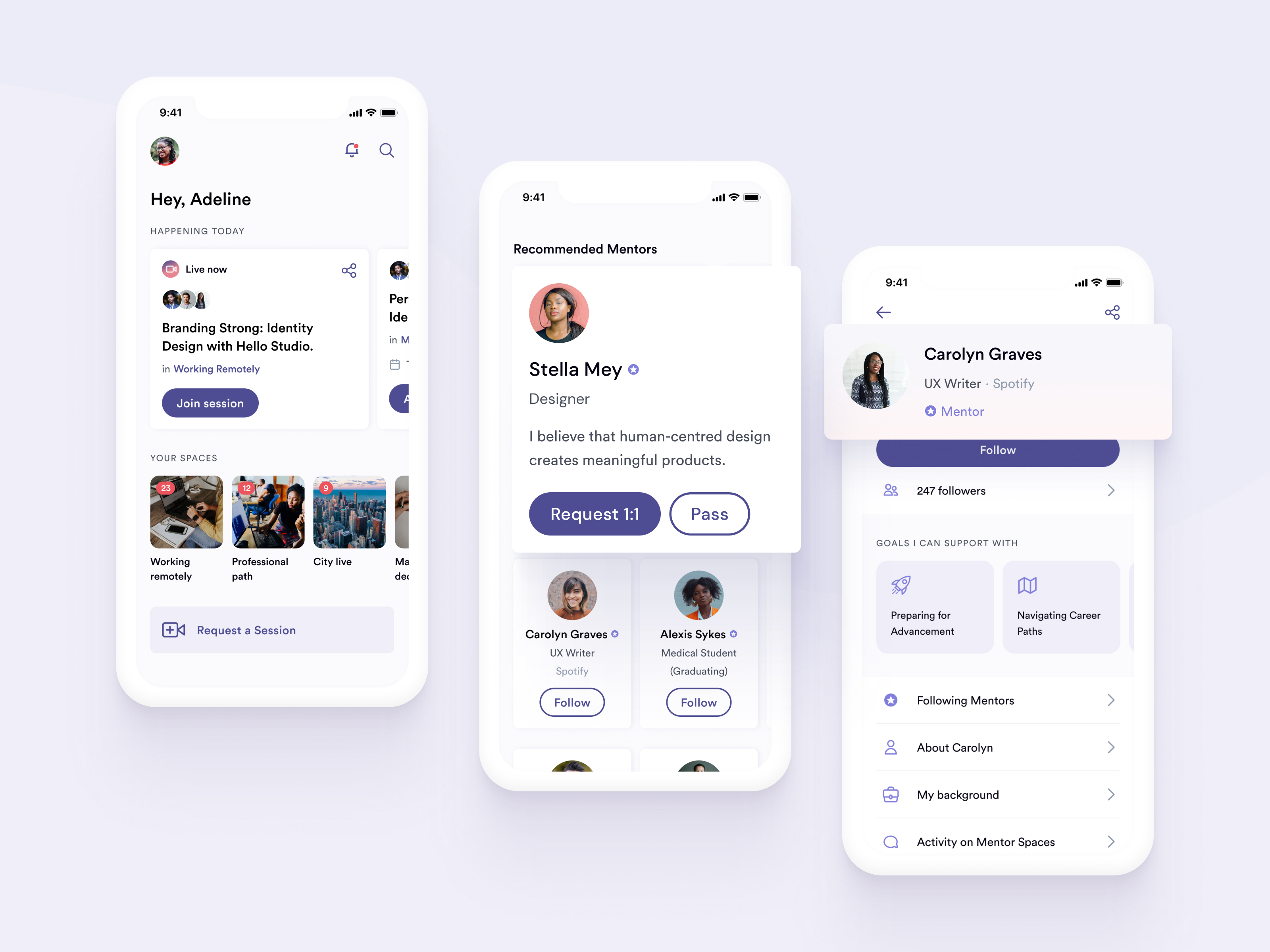 Entrepreneur Chris Motley wanted to boost inclusion and diversity in workplaces. We joined forces with him to shape and create a platform that facilitates virtual mentorship among employees and prospective candidates while advancing the careers of underrepresented talent.

On December 1, 1955, a woman said enough. It seems incredible that only a few decades have passed, but in those days in the United States, if you were African-American you couldn’t sit freely on public transport just because you were black. When the driver approached that woman, activist Rosa Parks, demanding that she give up her seat to a white man, she uttered a "no" that has resonated to this day.

Parks wasn’t tired, she was sick of accepting the intolerable. Her brave refusal was heard across the country until it lit the fuse in the fight for civil rights. On the day she was tried, the city buses were left empty. Nearly 40,000 African-American commuters chose to walk to work as a show of support, some were based more than 20 miles from their homes.

Today, on the anniversary of her heroic act, and also at the start of Human Rights Month, we have decided to tell you the story of Mentor Spaces, one of the products to which we have dedicated the most time and affection at Z1. To give you an idea, more than 15 colleagues have rowed together to shape the design, engineering, and content of this app built on the ideas of equality and diversity and focused on mentoring people of color for their successful leap into the professional world.

A person can’t be who they haven’t seen. Those who have achieved professional success despite the flagrant racial injustice that still exists today should be seen so that those who are starting out in their career can learn from the experiences of others and know that they can also play a prominent role in big companies. The problem that Chris Motley, founder of Mentor Spaces, discovered was that emerging Black professionals lacked the confidence and social capital to successfully navigate their career paths.

Motley, who before becoming an entrepreneur was the son of a single mother raised in the Chicago suburbs, knows first-hand how much it costs to build a future if you are not a young white man with a rich family. Thinking that other young people could have it easier than he did, he founded Mentor Spaces.

The idea was for young people to see themselves reflected in mentors who have achieved job success, to create a mirror effect, to exclaim: "Hey, that could be me!"

The vision of Mentor Spaces is to advance the careers of underrepresented talent through mentorship. At the same time, the companies and mentors linked to the community would enjoy direct access to the best-underrepresented talent. The idea was for young people to see themselves reflected in mentors who have achieved job success, to create a mirror effect, to exclaim: "Hey, that could be me!"

Movements such as Black Lives Matter and even the pandemic itself, with its consequent crisis in the professional market, led this CEO to give his platform another dimension, to seek a greater scope. "The crisis generated by the virus, among other events, amplified many of the problems we wanted to tackle, which is why a platform like ours is more necessary today than ever," explains Motley, who saw in the current crisis an opportunity for the project, to stop rotating, to better think about the scope and strengthen the team.

“Moreover, Black Lives Matter served as a catalyst for private conversations about race that had been going on behind closed doors, or not at all, very publicly. Combined with Covid and subsequent effects: canceling of sporting events, concerts, etc… global attention focused on systemic racism and how it impacts the lived experiences of so many in this country and around the world.”

Today they have managed to be the first company to use community-driven mentorship created with the idea of building bridges between corporations that want to attract, hire and retain diverse talent. “Companies understand the value in diversity.  What they don’t fully understand is how to achieve their goals. Our position is that mentorship is the strategy to achieve their DEI goals. We are the first company to scale mentorship for the purposes of pipeline cultivation for large enterprises that want to better attract, hire and retain diverse talent. I don’t obsess too much over features - although I like that we are native mobile. Instead, I obsess over the results. We want to ensure that our community members are having quality conversations that advance their career goals and that our customers are building high-quality pipelines of professionals who can be productive within their organizations,” Motley adds.

Mentor Spaces has made things a lot easier for professionals like Jordan Jones, Associate Director of Diversity & Inclusion at Omnicom Media Group, who had a goal to help young talents: “I’ve always had a desire to mentor the next generation, but high schedule demands have often gotten in the way. Mentor Spaces has helped solve that issue by connecting me with young professionals via the app. The group and one on one sessions are both flexible and rewarding.”

But also to those talents who have been lost on their way to professional success. Vaden Williams, a student at Capella University, explains it graphically: “You feel like you’re in the same room with your mentors. They helped me identify my strengths and how to use them. I received years of knowledge in a single conversation. It has made a huge impact on me and my self-esteem. I can see where I'm going now.”

Along the way, they have also reached great milestones, such as collaborating with Bill and Melinda Gates. “We’ve developed a core competency in building relationships with organizations who care about the same things we care about.  The Bill & Melinda Gates Foundation cares about career outcomes of underrepresented populations as they transition from post-secondary education. The research they helped to fund provided many insights that are the foundation of the product and user experience.”, the CEO thanks.

Precisely, the user experience has been one of the great highlights since Z1 began its partnership with the Mentor Spaces team. On the initial website, says Irene Utrilla, the Z1 designer in charge of the project, the students were asking questions and the mentors answering them in a division by areas similar to what the Slack channels could be. So they only had two roles, professionals and students. “When Black Lives Matter emerged, we saw that the initiative was going to multiply a thousandfold, that it would become much more visible. Together, once they found new investors in light of the events, we decided to improve it and adapt it to the new situation. Z1’s job was to provide maximum flexibility to adapt to the new situation”, she explains.

Helping to develop a movement

In this context, from Z1 we redesigned their website, we help them with the contents in order to achieve a closer, motivating and, at the same time, combative message and, then, we advised them to develop the native mobile app for iPhone and Android, one of the great successes of the project.

"We advised them to develop the native mobile app for iPhone and Android, one of the great successes of the project"

In the months that followed, our mission was to bring coherence to everything. “One of the characteristics that we are most passionate about Mentor Spaces is that it is a WIP product that grows with the community it wants to help, with its own needs. During this time, we have learned that there are many issues in terms of inclusion that we do not notice, it is a client that has opened our eyes more. In addition, we are talking about an initiative that perfectly aligns with Z1’s own philosophy, that is why we work with enthusiasm to adapt to your changes and needs. I think we have never had a process with so many iterations”, adds Irene.

Motley says that working with the talented Z1 team added expertise to the team. “More than anything, having highly skilled people with a valuable perspective to share always makes for better products.  Z1 had a deep background in the HR and recruiting space which meant that we didn’t have to explain every nuance. Z1’s design expertise certainly expanded our thinking when considering how to bring this product to life.”

“We want to be the best mentoring app in the world”, Chris Motley, CEO of Mentor Spaces

Mentor Spaces is also a lesson for professionals who make digital products since it teaches us that no matter how commonplace and trite it may sound, that our work can help build a more just world. The project could not be better on track: among other merits, Google Play named it as one of the Best Products of 2021 in relation to its positive contribution to culture, in the category of Best Apps for Good.

"We want to be the best mentoring app in the world," says Motley emphatically. And he concludes: “People love that we are facilitating conversations in such a way that allows one to give back while others are moving closer to achieving their goals.  Scaling this effort has its challenges and that is where we spend a lot of time. Each individual is a small business, and if we can help others achieve their goals, then our business grows. We certainly know that this is the right direction, but we’re learning every day how to make the product and brand turn into a movement. We have a long way to go”.