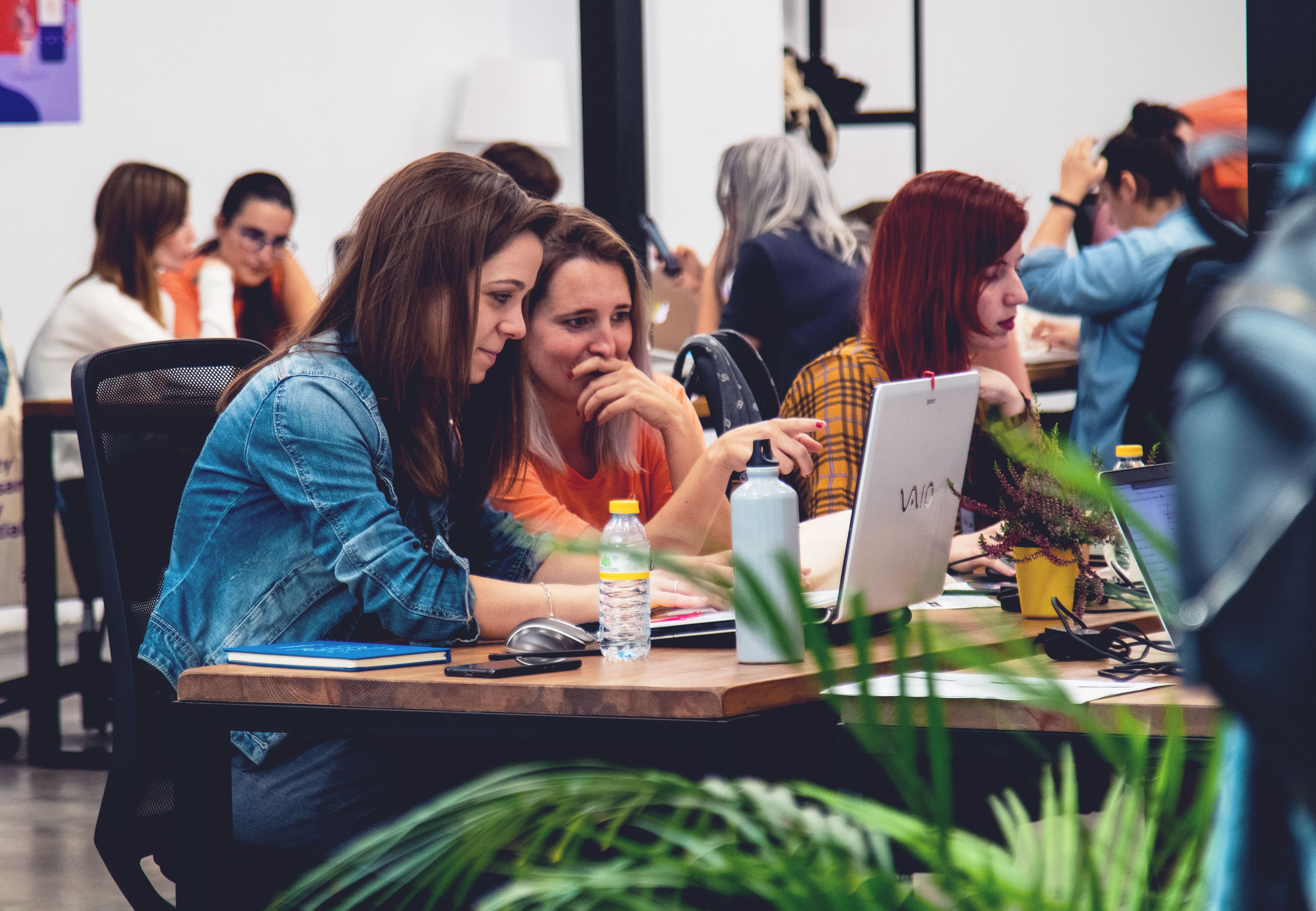 Motivation, collaboration, and support. The keys that helped us to inspire women in our community to fall in love with programming.

They collaborated to make the first free programming workshop for women, Django Girls in Sevilla, not only possible but also a success, judging by the results of our satisfaction survey, the beautiful messages I have received since the event, and the engagement with #DjangoGirlsSevilla on Twitter.

This article is recognition of all the people, companies, and entities that trusted the idea. Together we managed to bring the world of software to almost fifty women without prior technology knowledge last weekend.

Organizing an event like Django Girls and ensuring everything runs smoothly is not something that happens by luck. Everything takes place in a hectic single day. However, the often silent and invisible preparation work put in before the event deserves some reflection.

Why discuss the preparation work?

First, it’s important to acknowledge the difficulty, time, and love that must be dedicated if you want to make a positive impact with the event.

Sharing this experience can also serve as inspiration or a guide for others who also want to contribute to reducing the gender gap in technology.

Forty-four women without previous knowledge of technology attended the first Django Girls Sevilla. There could have been many more: 174 applications were received organically, without us having to exhaust the resources we had to advertise the workshop. This number shows the interest generated among the women of Seville. Unfortunately, we didn’t have the space or resources to accommodate more participants.

The attendees’ profile has been diverse. We wanted to host a representative sample of society. Many of them are unemployed, a few are entrepreneurs, some other students, and many others are employees. They all have two things in common: infinite curiosity and tremendous strength to face new challenges.

Almost 60% of the participants have expressed their plan to continue training in programming after the event. The rest have also shown their interest in continuing to learn.

The workshop aimed to awaken vocations, banish fears, and discover technological capabilities among the attendees

How it all started

I remember the first time I heard about Django Girls. I knew Django because it is a tool we usually use here at Z1. Slothy, one of our engineers, handed me the link to the Django Girls website. I was surprised I had never heard of this initiative before, and that Seville had never hosted any of these workshops.

It all started with a simple question: “Why don’t we organize it?”

In Z1, we work mainly with clients from the US and Canada, but our HQ is in the center of Seville, Spain. It is a 700m2 store called Magma, which we share with cool companies such as Upwelling or Sensa. Since last year we have been growing at a frantic pace, going from being a small studio with a dozen people to a staff of almost 50.

We are a big family. The projects we are working on, the flexibility we offer, and the good vibes among the team, make it an ideal place to develop your career. That’s why we receive many CVs.

Many of the positions created in Z1 are for technical programming profiles. The alarming thing is that the majority of CVs that come to us are from men. We believe in mixed and heterogeneous teams. We know the advantages they entail, but we find it challenging to hire female programmers because we can’t find them!

Different studies speak of a downward trend in the enrollment of girls in software careers, lack of references, high self-demands, and low self-esteem. The causes are multiple, and the problem (because yes, it is a problem) can and should be addressed from different fields and perspectives. That is why when we discussed the Django Girls initiative in Z1, we decided to use part of my work hours and our space to make it happen in our city.

The first thing we did before embracing the idea was a risk analysis. Organizing such an event requires considerable effort and some budget if you want it to go well and make a positive impression for everyone involved. To my hours of dedication, we would have to add those of other team members—often quite high up in the company—and external collaborators who share principles and values ​​with us.

No matter how hard you try: One person alone can’t bring all this to fruition.

However, it should not be overlooked that getting involved in such a project is highly motivating. We like to think that at Z1, we are not only here to make our clients succeed and prosper, but also to generate a positive social impact. Helping others with our time and knowledge is an excellent investment in the self-esteem and happiness of the team and the people involved in the organization.

Some of the following points may seem obvious, but they are well worth covering:

🤝 Getting support is vital and takes a long time. The search for sponsors and collaborators took us from March to September. If we consider that Django Girls Sevilla took place in October, it may seem an exaggeration. But experience has shown it was right: Start as soon as possible, don’t leave it to the end.

👾 Going viral works. The more buzz your event creates in the community, the more companies would like to join it. On the other hand, don’t take help for granted. “That big company in your city that works with Django” doesn’t have to want to contribute. You will have to be creative when it comes to searching and not giving up on the first “no”s (and there will be a few).

✨ Put work into the design of your presentation and sponsorship dossier. If you are going to ask for money, especially if you are cold-calling, both you and the tools with which you present yourself should leave the best possible impression. I have seen every badly-designed dossier out there. If you don’t know design tools, ask for help (thanks, Lucía!). But never send generic emails with a poor pdf, as you’re are unlikely to get the response you want.

💰 Create a minimum viable budget. There are many free events (like Django Girls itself), but that does not mean they don’t cost money. Reflect on what you consider 100% necessary and make a budget. Aiming high is fine, but it is imperative to distinguish between what is fundamental and what is an accessory.

I would not recommend organizing this without having a minimum of available cash. Just buying materials and food will use up a good amount of money. We managed to raise 3K €, not counting the rent of the space, assigned by Z1 / Magma. Without money, it’s difficult to organize a memorable day.

⏰ Set a deadline. “If I don’t get X on Y date, we can’t do the workshop.” Be honest with yourself. It’s better to cancel the event on time than to hold it without guarantees. In our case, we had to delay it once. We had not announced it, so it was easy to do just by letting the Django Girls organization know.

📝 Create other important documents. When looking for support, the sponsorship dossier is not the only relevant document. You will also have to sign a contract that guarantees that what you promise will be fulfilled. You’ll also need to make invoices to handle payments. The Python Association in your country can help you at this point if you do not organize the event under the umbrella of a company, or if you are self-employed. You will also need attendees to sign a permission of consent form if you want to record videos and take photos at the event.

🛸 Let your imagination fly, and take care of the details. Maybe some companies cannot contribute to your event with cash but would still love to take part in it. For instance, in Django Girls Sevilla, we had one of the most beautiful bookstores in the city with us, Caótica. They put up a stand at the event, and we also achieved a fair impact on social media by raffling several books on female empowerment in technology and business. Also, Ofelia Bakery, a cool café that bakes their own pastries, made us a special offer when ordering some beautiful cupcakes. Thanks to OpenWebinars, we were able to giveaway several licenses to their on-line courses to attendees. And so on!

👩🏻‍💻 Look for female mentors and references. Finding women programmers in your environment may seem hard. I believe, however, that conducting a women’s empowerment technology event where all mentors are men does not make much sense. Look for alliances with women’s associations and entities that promote equality in your city. In our case, we rely on Ping a Programadoras and WomANDigital.

We also name each table with modern science and technology women. Marie Curie, Ada Lovelace, and Hedy Lamarr were wonderful, but it’s good to stress there are other less-celebrated women out there. Sara Soueidan, Kelly Vaughn, Nadieh Bremer… There are lots of women who are currently kicking asses in science and technology. Let’s talk about them too!

💌 Confirm and reconfirm. Django Girls makes it easy for you: Through its website, you can send an email to those registered with a button to confirm attendance. For an event like this, it is essential to keep on top of this. Sending a couple of emails reminding them of the date, as well as other features of the event, will engage your attendees and generate excitment before the event. In our case, eight people were missing the day of the workshop. We had a small and controlled group of people overbooking, so finally, only four seats were left free. It’s not ideal, but we didn’t want to play around too much with overbooking as it is a risky business.

📊 Measure results. Use tools like bit.ly to find out how many people have actually opened your press release, or Typeform to submit a questionnaire after the event is over. As Raquel Gomez of Signify said in the final talk: “What is not measured, does not improve.”

🎉 And above all, have fun! If you do things with time and organization, in the end, it is not only work: You will meet new people, make valuable contacts, learn a lot, and end up exhausted, but you will have a lot of fun along the way. That 💯 for sure.