Mailman, the superhero who will save you from your inbox 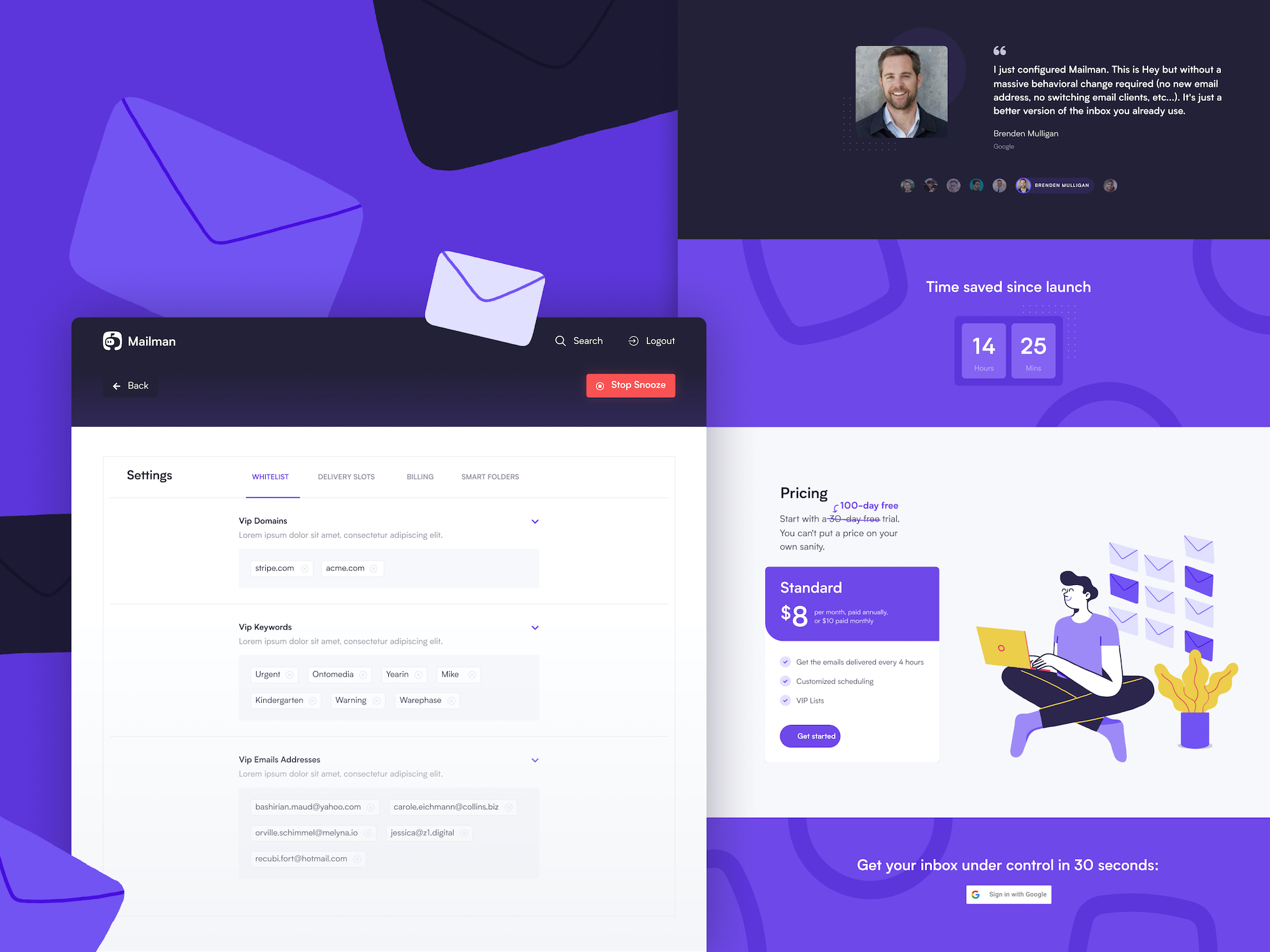 Does your inbox feel out of control? We introduce you to the solution we helped to create. An assistant who works with any email clients to make your days more productive. Be the master of your time

At this point in the digital era, almost everyone has multiple email addresses and receives far more emails than they may ever be able to read. The idea of ​​needing another life just to manage all this information haunts us all too often. The number of unread messages continues to grow day by day. During 2020, your inbox has probably reached all-time records, with the consequent stress that these numbers produce, especially if email is a fundamental tool in your professional life.

Each message, from the most important to the most insignificant, represents a new demand on your time, a decision that you have to make, and a waste of energy. If you can't even open them all, that stress transforms directly into anxiety and fear of leaving something important behind. On the other hand, the attention time required for an inbox is inversely proportional to productivity, since it is a continuous distraction from the task we are doing.

‍A representation of the uneasiness of the fast-paced world in which we live could be summarized in this scene: a worker opens his email still with the cup of coffee in hand and finds about 50 new messages since the night before. The streaming services want him to watch their premieres. His sister asks for help to decide the gift for mom’s birthday. His boss demands him to another interview, and one client is sending him feedback. The website where he ordered dinner wants him to repeat tonight. It seems that another team meeting will be happening tomorrow; there are nine people in cc; it is difficult to keep up with the conversation. The company you collaborated with a while ago is offering you a new opportunity. And Google reminds you that you are late replying to that offer.

"For God's sake, give me a break!" Thinks the asphyxiated worker as he remembers Kafka's Gregor Samsa, that poor salesman turned into a big insect by the alienation of contemporary life.

Now we are going to ask you to reread the last paragraph. Among that diabolical hodgepodge of news, there are a few important messages that you can't miss. All of them, however, have consumed your time and energy, which will affect your ability to think and communicate. The serious thing here is that we aren’t only talking about a decrease in productivity—but in the quality of life.

Those were the problems that Andrew Wilkinson, Tiny founder, and the entrepreneur Mohit Mamoria noticed when they decided to create Mailman, an email assistant that combines a set of tools to literally tame the savage siege of your inbox, organize the time we spend on it, and select from among that information tangle what are the important messages and at what time will we read them.

In Mohit’s own words, he is an obsessive maker and likes to make stuff as long as it is useful to at least him. He is a self-taught programmer and has been building products since he was eleven. His first company was a software agency when he was 18, which he ran with three other friends from the college. Right after university, he got involved with early stage product teams and helped them solve challenging problems. He then ventured on his own journey of building profitable product businesses. He aspires “to add the 25th hour in the day to the lives of the smartest people by keeping them away from their inboxes.” And it seems that he will achieve it!

Mohit named his project Mailman because it’s a postman who comes as many times a day as you ask him to, blocking the incessant dripping of new emails. If we think about his name, appearance, and features, he is also a kind of friendly superhero who is here to make your life easier. A nice guy, helpful and close, who wants you to get rid of that unnecessary stress. At Z1 we have really enjoyed working together with Mohit to create the branding, the website, and the product design. This is the kind of project we love to get involved in, those that make our work improve people's lives, starting with ours!

Mailman limits the input of messages during certain hours. It allows the user to configure different parameters, such as the number of times a day that emails arrive, or that at certain times they do not bother them... However, you never lose the emails. Simply, the product categorizes its importance using filtered domains and keywords.

“Our inbox controls our lives, but we don’t control our inbox. That’s a twisted equation. Anybody who has your email address can easily put something in your inbox at any time of the day. Mailman offers you a suite of tools to get a better grip on your inbox and control who can get in when in your inbox. It acts as a firewall,” Mohit explains.

For an executive or manager of any level, email is probably the place where they spend most of the time, the tool that runs their days. “Email has become so ubiquitous that we use it for more than communication now. Notifications, newsletters, updates, receipts are all handled inside our inboxes now,” Mohit continues. What we needed, in Andrew Wilkinson’s words, who invested in Mailman, was "a gatekeeper" to take care of putting them in place.

Mailman is an email assistant, not an email client, and this is what sets it apart from most of the other email solutions

Mailman is an email assistant, not an email client, and this is what sets it apart from most of the other email solutions. Most of them try to build an entire email client to offer productivity to their users, while Mailman works in the background with any email client you currently use.

“Our most loved feature is the batched delivery. Instead of emails coming in 24x7 in your inbox, with Mailman, they come in only at the hours that you’ve specified. Mailman continues to collect all incoming emails throughout the day and delivers them to you in batches to your schedule, not the sender’s,” Mamorian adds.

Just for executives or do we all need Mailman?

‍In its beta phase, Mailman found that more than 700 people began to enjoy better use of their inboxes. “Everyone loved the batch delivery system. But, as happens with products in beta, we quickly learned some glitches and bugs as well. But with the help of our beta users and their support, we continued to fix them, and now are at a point where when a new user signs up, they get to know exactly what they should be expecting out of Mailman and how to get started with it,” Mohit celebrates.

Although it is true that Mailman was originally designed for executives at large companies—people who have to be helped without changing their habits and dynamics too much and, of course, without forcing them to use another mail platform—Mohit quickly discovered that his assistant could be helpful to all of us. “Mailman was the idea that came up with Andrew Wilkinson’s issues with his inbox. However, in beta we learned that almost everyone who has a Gmail account older than four years is finding Mailman useful. Having an old email address means getting a ton of spam and marketing emails. Therefore, having a firewall in front of your inbox really helps,” he says.

An old email address is synonymous with spam, marketing emails ... our firewall helps to manage this problem

For Mohit, Mailman would not have been possible without the help of Z1. “The team put life into the idea. They brought out the personality of the product with their branding and UX. Without them, Mailman would be built on some Bootstrap-based theme with a patched-up logo that nobody would love the way they do now. Z1 team has always played a pivotal role throughout the journey. I wouldn’t be able to thank them ever!,,” he says. And, honestly, we cannot deny it, the decision to humanize the assistant was a success and at the end it was super adorable.

In the beginning, recalls César Álvarez, creative and product designer at Z1, we suggested a logo focused on the functionality of delaying delivery times, with images that alluded to the possibility of postponing the emails, one of the product highlights. However, we presented a second idea in which the main character was the mailbox itself, a close guy who, like a nice superhero, with his little flag on his head, came to help users. Mohit loved it.

On the other hand, Fran Pulido, one of our illustrators, was in charge of creating a series of scenes that would provide the necessary drama to tell the users the story that we have been telling you. In other words, the inbox is like a monsoon that falls on our heads just to disrupt our calm, our order, our productivity, and ultimately our lives. Mailman wants to be the perfect umbrella against this storm. “Z1’s team has always played a pivotal role throughout the journey. I wouldn’t be able to thank them ever!,” concludes the founder of Mailman. We are also grateful, Mohit, Mailman is already helping our whole team to breathe better.

Before saying goodbye, we wanted to ask you a final question: How many emails have you received while reading this article?