A highly-effective alliance to build an insurtech founder’s vision 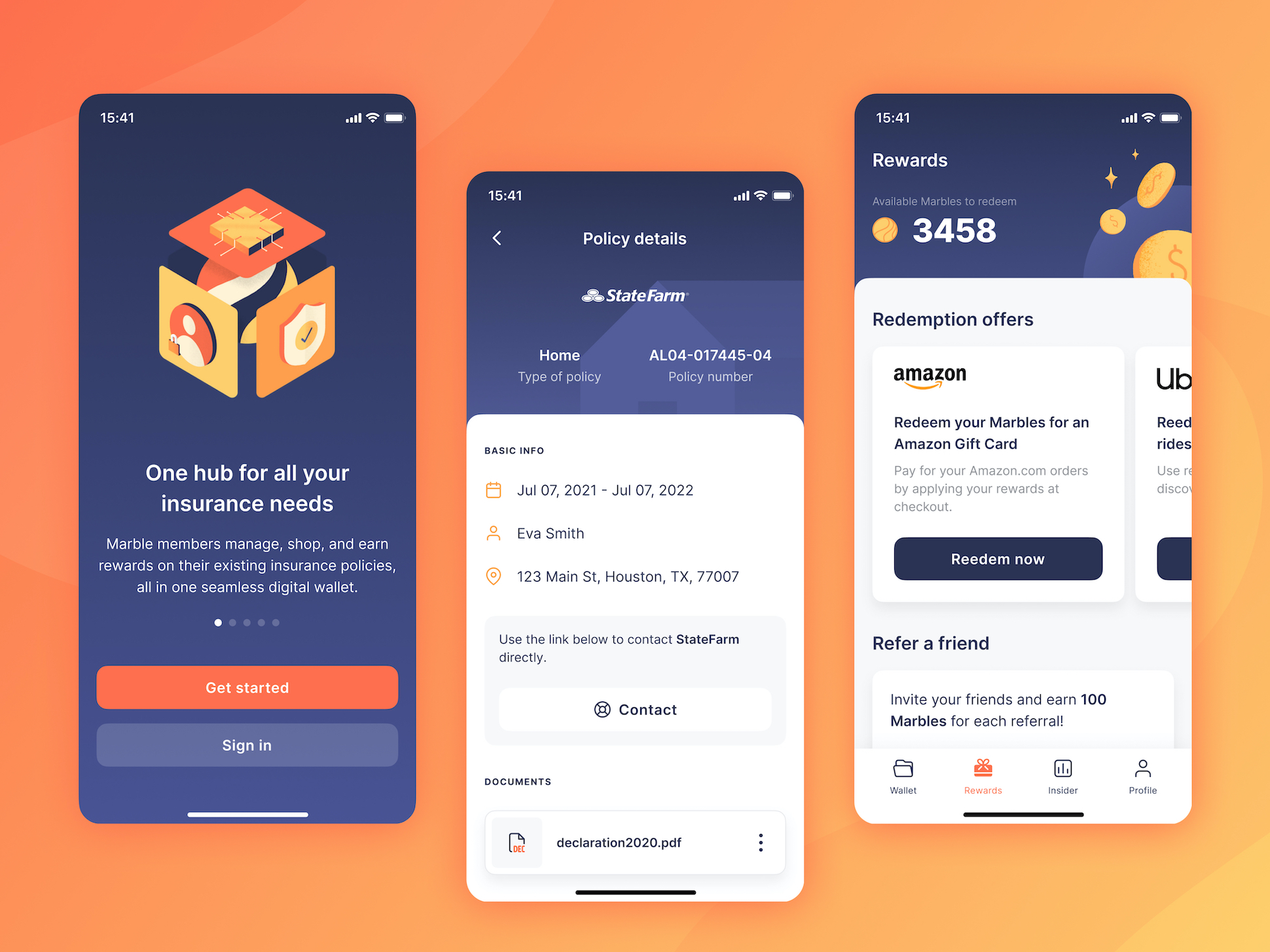 We teamed up with the startup Marble in its early days, shaping and crafting together the first digital wallet and rewards platform for insurance. After several months of collaboration, they raised $2.5M in seed round funding.

John and Eva Smith have had the same car for over five years. It’s a Volvo V40, a great car, which they use every day to commute since they work closely together. They have a 10-year-old child with braces, two lovely shepherd dogs, and they own a house outside New York, in Westchester County.

But John and Eva also have 200 policy papers stored in a cabinet in their garage and a 2 terabyte external hard drive filled with insurance documents mixed with pictures of their last holiday in the Hamptons. Not only that, the Smiths also keep paying a huge amount of money to insurance companies year after year to keep safe all of the above, what they care most about.

Not having time to stay up to date with their policies, nor to research new offers in the intricate market of insurance, it feels best to just go with the flow. This means stick to the decisions they made five years ago, when they bought their Volvo, or six years ago, when they adopted their pets. Even though no one would ever reward their loyalty to their car insurer or to the rest of the policies they hold.

“Today, there are critical problems on both sides of the insurance marketplace”, explains Stuart Winchester, responsible for ideating the first digital wallet and loyalty platform for insurance: Marble. “For most US households, insurance is a trillion-dollar asset that is still relegated to PDFs or filing cabinets.” He knows the field. Before launching Marble, Stuart was the General Manager of Better.com’s insurance vertical and, after that, he spent one intense year researching the ins and outs of his insurtech idea.

Americans keep spending up to 10% of their household budget on insurance.

It was almost unbelievable to him how Americans keep spending up to 10% of their household budget on insurance and how the industry has yet to introduce technology solutions for their clients or a modern rewards program.

The American insurance market is a huge industry and one of the largest in the world as it continues to grow. Note down one fact: More than 4.6 million Americans have newly gained healthcare coverage since the Biden Administration took office in January 2021, according to the statistics of the CMS - Centers for Medicare and Medicaid Services.

Marble empowers a whole community of engaged members who help each other navigate insurance with modern tools and high-quality, verified data.

Taking these vast numbers into account, Stuart decided to get the ball rolling with Marble, empowering not only John and Eva’s family, but a whole community of engaged members who help each other navigate insurance with modern tools and high-quality, verified data.

Founded in 2020 in New York City, Marble’s aim was to create a digital product where customers can keep their policies in a secure and easy-to-navigate space - and at the same time - earn and redeem rewards such as savings on premium payments.

Being a solo founder, in the early days of Marble’s conception, Stuart needed help to create his innovative idea. Adi Sundar, with whom we’ve worked before building other startups from inception to launch, became Marble's CTO.

The connection was made: “The Z1 team has been incredibly supportive through the different projects I have worked with them on”, says Adi. “I knew from day one of Marble that I wanted Z1 onboard.” Yes, Adi loves us, but it’s reciprocal.

Marble’s CTO  was sure our team would help them turn their idea into reality: “Z1 brings unique expertise to help craft and deploy products for early-stage teams. Their process starts making sure that every team member understands the what and why of the project before creating solutions. The product and design teams fully immerse themselves in the company’s vision. Only then do they continue through architectural design and development”.

This collaboration soon became a highly-effective alliance, with Z1’s designers, frontend, and backend developers teaming up with Marble to lay the foundations of Stuart’s vision.

In order to achieve its goals, we knew Marble needed an intuitive and seamless user experience. Irene Utrilla and Javi Pereira, Z1’s Product Designers, were pleasantly surprised at how smooth the process was when designing the UI. “It wasn’t as complex as you might think when the word insurance comes to mind. We were able to use our experience to create something generic yet essential within three months,” Javi explains.

The visual design of the product, as well as the branding, was inspired by art from the 1970s, with Javi and Illustrator Fran Pulido working together with Marble to produce a highly aesthetically pleasing experience.

Stuart wanted to use marbles because they’re fun, something you can collect, but also in another context, a symbol of established banks and financial institutions. He also provided two references for the look and feel he wanted for Marble: Modern Sewer Design’s first edition book cover by American Iron and Steel Institute, and a vintage Air Afrique poster from Mali. We immersed ourselves in that unique universe for a while and got back with fresh ideas.

Fran used a higher proportion of warm colors and a few touches of cold to get vibrant, warm pieces that convey confidence to the consumer. He created a beautiful set of illustrations that resemble toys to connect with Marble’s users. “I wanted the pieces to have their own personality throughout the app and website. No matter how simple they were, like a folder, for example, they would continue to transmit transparency, trust, and security. These intangibles are great for a product like this.”

A robust backend and frontend

One of Marble’s key features is the digital wallet, where customers can store their insurance policies in a more user-friendly form than PDFs. In order to collect this sensitive data, Álvaro Rubio, Z1’s backend developer, explains that we worked with two different technologies: “We used Canopy, an API that leverages web scraping to securely obtain users’ policy data by means of their insurance credentials. On the other hand, if preferred, users can upload their insurance policies directly to Marble where the relevant data is extracted by Sensible, an API powered by machine learning. We also used React with TypeScript and Apollo GraphQL in the frontend as well as Django and Graphene in the backend."

The mobile app came around 18 months into Marble’s existence. “By this point, we had already built out a robust backend and web app frontend with the help of Z1,” Adi reveals. “As a result, Z1 recommended that we build the first part of the web app with a Django (Python) backend and a ReactJS frontend. Because of this, it was a natural choice to pick React Native for the mobile app.” Our React Native developers Álvaro González, María Peláez and Rodrigo Sanabria got down to work.

“Z1 has the ability to be fully immersed as part of your team and take on projects with full autonomy was unparalleled and something I have never seen done so well by an external team”, Adi Sundar, Marble’s CTO.

One of the main challenges was to build the mobile app with as little distraction as possible. Adi admits that “Z1 was uniquely equipped to deliver on this task”. With a team led by Z1’s Projects VP Marta Becerra, he was able to confidently deputize us to take a snapshot of the existing web app and create a mobile app with very little distraction to the rest of the team. “This ability to be fully immersed as part of your team and take on projects with full autonomy was unparalleled and something I have never seen done so well by an external team,” reflects.

Stuart and his team, including their lead investor Andrew Lerner, who is Managing Partner of IA Capital Group, are loving the app. “The general UI/UX is simple and modern, yet powerfully valuable to the user.  I love the wallet cards and how so much valuable information can be displayed to the user—it’s a lot of complex information organized elegantly”, claims the founder.

At present moment, the app is still in early beta with around 50-75 users in total, however, all the feedback so far has been exceptionally positive. Andrew Lerner even describes the app as having “the best user experience” of any insurance app he’s ever seen.

"Marble would not be in the position they are today without Z1", Adi Sundar, Marble’s CTO.

Reflecting on the partnership and the final result as a whole, Adi affirms Marble would not be in the position they are today without Z1, and Stuart admits Z1 totally exceeded his expectations. “We interviewed a couple of different studios before partnering with Z1 and I couldn't be happier with our choice. The quality of their engineering work, exceptional product-minded execution, and talented designers have really all been totally critical to Marble's success”. Those are exciting words to hear!

On February 10, 2021, Marble announced that they had raised $2.5 million in seed round funding from their investors, which include IA Capital Group, MS&AD Ventures, Reciprocal Ventures, Fintech Ventures Fund, The Takoma Group, and HU Investments.

Tiffine Wang, Partner at MS&AD Ventures, told PR Newswire, "We really love what the team is building at Marble. The product is giving power and transparency back to consumers, along with rewards. It's creating a brand new experience for the next generation of insurance policyholders."

"Marble is a win-win for customers and insurers,” declares Andrew Lerner in the same press release. “Customers are demanding a better way to manage their disparate policies and accounts. Insurers want a better way to engage with customers. Both would rather have insurers spend billions of dollars less on advertising, and have Marble give those billions of dollars back to the customer."

The private beta version of Marble was a huge triumph with hundreds of members signing up to the waiting list before the final product is released. It’s an app like no other—its unique aesthetics make it rise above any other in the insurance industry, while its function as a one-stop hub for centralizing policies and earn rewards makes it indispensable for all policyholders.

We are proud to have been given the opportunity to help Stuart on his mission to improve the ecosystem for insurance companies and the 92% of Americans who are policy holders. Remember John and Eva? After using Marble they finally have room in their garage for something other than hundreds of insurance papers. Now it looks so easy!