Two apps, one goal: to match investors and advisors meaningfully 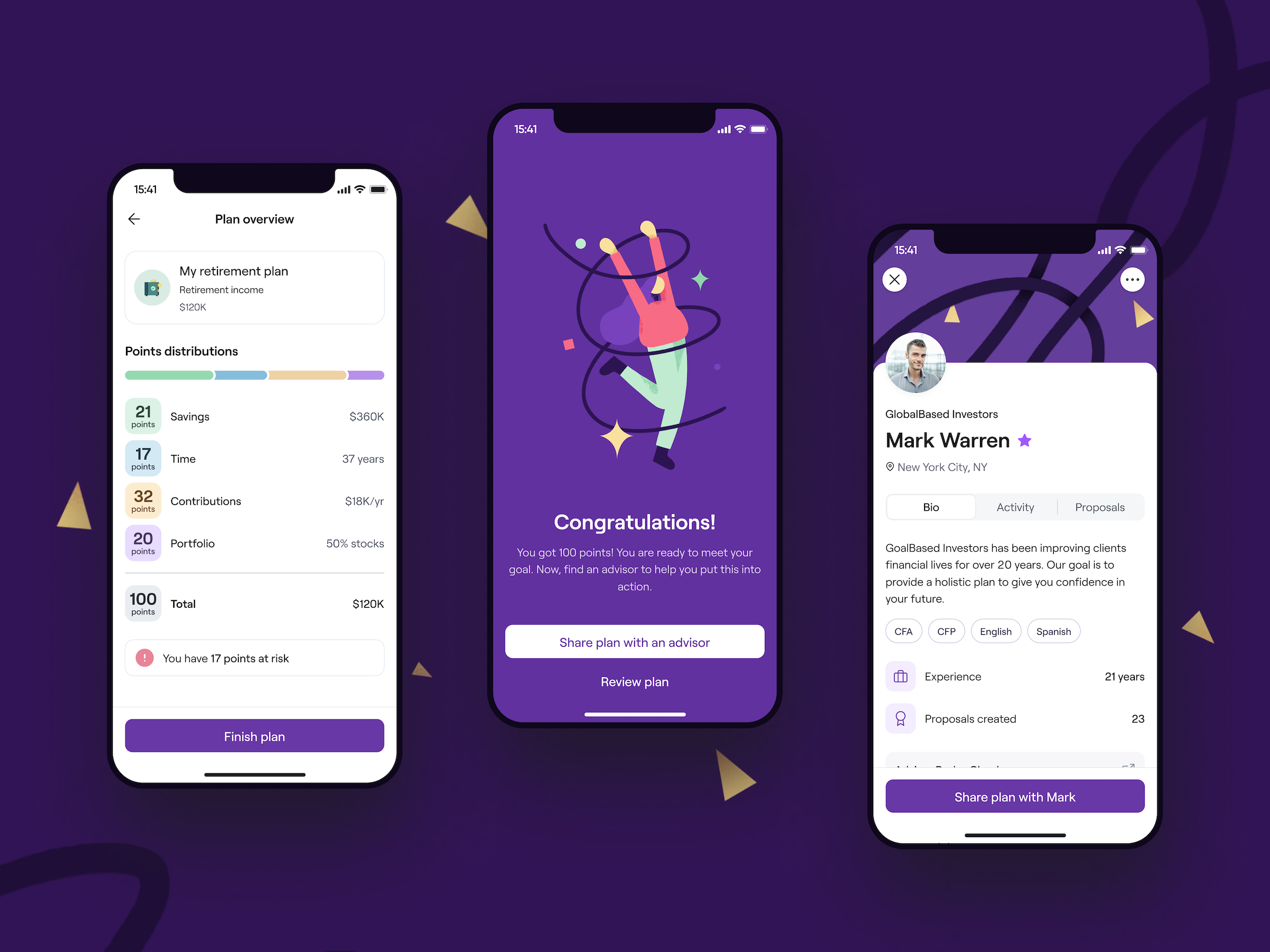 We joined forces with GoalBased Investors (GBI) to create Lasso, a gamified platform that brings consumers and financial advisors together through two interconnected apps, each with its own customized experience.

It’s been almost two years since the coronavirus recession began. Today, around half of all non-retired adults in the United States say the economic consequences of the pandemic will make it harder for them to achieve their financial goals, according to a recent Pew Research Center study. Furthermore, around 10% say their finances may never recover.

With these insights, it is more important than ever for people to access financial advisors who can provide expertise to those seeking help with their financial planning. However, it’s not easy to access this financial expertise if your knowledge on the topic is limited, which according to the Global Financial Literacy Survey, is nearly 70% of the world’s adult population.

The belief behind the creation of Lasso was, according to GBI’s President Becca Long, that technology can help deliver financial advice at scale. Yet, as claimed by Becca, when you look at what is available in the financial technology space, you find many solutions that are still too complex and rely too heavily on individuals acquiring some, admittedly basic, level of financial literacy. “We saw how unprepared many people really are to achieve financial milestones, like retirement, and how much of an impact it makes when individuals are able to get access to professional advice”, she reveals.

Looking at the big picture

GBI was introduced to Z1 in Summer 2020 through one of their investors, and Chip feels the partnership was ideal for the production of Lasso: “As soon as we began talking, I think both Z1 and GBI realized it would be fun and productive to work together on this project. There was also an immediate bond of trust in Héctor, Z1’s CEO, and his team that we would manage deadlines and the inevitable surprises in a professional and proper manner. That has turned out to be the case over an 18-month working relationship.”

The biggest challenge with Lasso was the parallel development of two different but interconnected apps, one for iPhone focused on investors and one for iPad for advisors.

The challenge the GBI team brought when they first arrived at Z1 was apparently a simple one: connecting advisors with investors, something we could have crafted within a couple of months. However, when we got to work, the scope got bigger and bigger: We discovered loads of corner cases, privacy-related issues that had to be solved, and the need to develop a gamified points system. But the most interesting and, at the same time, the biggest challenge with Lasso was the parallel development of two different but interconnected apps, one for iPhone focused on investors and one for iPad for advisors.

This parallel development required excellent synchronization between the teams, especially with the backend, since each version of the app had to include the new features in both apps, so what was done in one affected the other.

Javi García, one of our iOS developers involved in the project, ensures that Lasso has been one of the most technically stimulating apps that the Z1 iOS team has created: "It was the first time we had faced a project like this. The usual process is to adapt the app to new devices, however, Lasso was different." he continues explaining, "Lasso requires very close communication with the servers but we didn't want to sacrifice the feeling of fluidity and speed for the user. We worked hard to achieve permanent communication with the backend without letting the user experience down".

"Lasso has been one of the most technically stimulating apps that the Z1 iOS team has created", Javi García, iOS Developer.

The use of powerful libraries such as RxSwift for handling events and responses asynchronously was crucial. It was also important for managing user flows, such as creating plans, where the users can observe the points they are obtaining based on the inputs and changes that they are introducing almost in real-time. “We used Apollo to connect to the GraphQL API, which gives you the flexibility to ask the server for only what you need, improving response times and removing unnecessary information from the communication”, concludes Javi.

Climbing the mountain together

At the same time, we came out with different ideas to help GBI tell their story. The initial concept was centered around the imagery of mountaineering with investors striving to achieve their personal summit with the aid of Sherpas—or financial advisors in this case.

Our illustrator, Fran Pulido, explained that the original designs intended “to guide and stimulate the user at all times to continue working on their financial goals. This concept was born out of the idea of climbing as a metaphor to portray the journey of achieving your goals, where you can ask for help from a Sherpa, reach certain peaks, even get lost and then find your path once again.”

However, in business, as well as mountaineering, sometimes taking the road less traveled can prove to be more fulfilling. Z1 was able to demonstrate our ability to adapt and evolve in the branding process. Fran elaborates: ‘GBI decided to change the name of the product and also the graphic concept. The app was renamed ‘Lasso,’ and we moved away from the climbing world.”

Further research revealed that mountaineering is a common metaphor used in the finance space, and financial goals are often represented as “mountain peaks.” In contrast, the process of achieving that goal is represented as the journey to summit a mountain. “We came up with the Lasso concept to invoke the idea of harnessing the power of financial advice and bringing people together in a community-oriented way,” explains Becca.

Embracing the new branding of the product, Z1 decided against an obvious cowboy theme, instead, creating the lasso as a simple line that interacts as a visual aid to enhance the message of the app. Describing further artistic choices, Fran adds, “The color palette also completely changed from light, saturated colors to very bright, heavier ones. To convey concepts such as saving, improving, and seeking help, I used simple geometric figures, so we were still at an abstract point, but visually, we had an attractive and very adaptable solution to communicate the message.’

One of the main challenges was to ensure that Lasso was easy enough for anyone to use. Emilio Merbilhaá, one of the Z1's product designers involved in Lasso, continuously encouraged GBI to simplify the user experience and create a product that could engage any user. However, the process was not so straightforward for our developers either as they had to overcome a number of obstacles of their own.

Antonio Benítez and Juanjo García, current main back-end developers in this project, describe what they learned along the way: "We improved our knowledge of the technology required to create such a digital product consisting of two interconnected apps. For example, we used 'Dataloaders' to enhance query performance, which enable automated, high-volume importing and exporting of data. We used third-party services to carry out user authentications, so we also had to study each case depending on the provider."

As with every successful partnership, effective collaboration is key, and GBI's CTO, Chris Anderson, a former Googler, has been supervising all of the development side, turning out a robust and scalable digital product of the highest possible quality.

"Z1 team truly felt invested in our product and in the goal of bringing the best possible experience to market," Becca Long, GBI's President.

Becca has lauded the mutual respect between both teams: “We appreciated how the Z1 team truly felt invested in our product and in the goal of bringing the best possible experience to market.” From the Z1 side, Product Manager Jose Alberto, worked closely with Beca and Chip during the whole project and is impressed with the entire GBI team: “It has been a pleasure to work with them. They are the kind of partners that make you grow, and even in the tough times, they show themselves to be empathetic, close, and constructive.”

Growing with the community

The Global Financial Literacy Excellence Center points out that only 24% of millennials are considered financially literate while a recent survey carried out by the Teachers Insurance and Annuity Association of America shows that 63% feel anxious about their financial situation.

In light of these figures, Becca explains: “We built Lasso to focus on the critical consumer needs of financial planning and advice discovery and to solve these needs with a platform that is quick, intuitive, and simple enough for anyone to use, regardless of the level of financial literacy. We recognize that managing finances is a difficult thing to do entirely on your own, which is why we built Lasso to be a community-based app”.

Lasso’s main goal is to help people create better financial outcomes. “Sharing, learning, and being able to have better conversations about financial topics is a big factor in achieving financial success. A community creates the opportunity for people to learn from one another by seeing how others are constructing plans to meet their goals and which experts others are seeking out for help,” adds Becca.

GBI has had an overwhelmingly positive response to Lasso. They raised $2.75M in a seed funding round led by Silicon Valley venture firm True Ventures after a few months working together. Since it launched last December, investors have commented that the interface is very intuitive and it helps them visualize their progress toward their goals in a way they hadn’t found in any other tool. Advisors see Lasso as a better (and free!) option for engaging with new clients than what they are currently using. The responsiveness of the app and the quick nature of the process, that results in a valuable proposal that can be sent to prospective clients, are some of the most praised features.

We took Lasso from zero to one, and we're happy to have helped such a relevant firm as GBI to achieve its first goals with this digital product. Today, we are still working together, developing the web app version of Lasso, while helping them build an in-house back-end team because, despite all the roads GBI has ridden so far, Lasso's adventure has just begun.