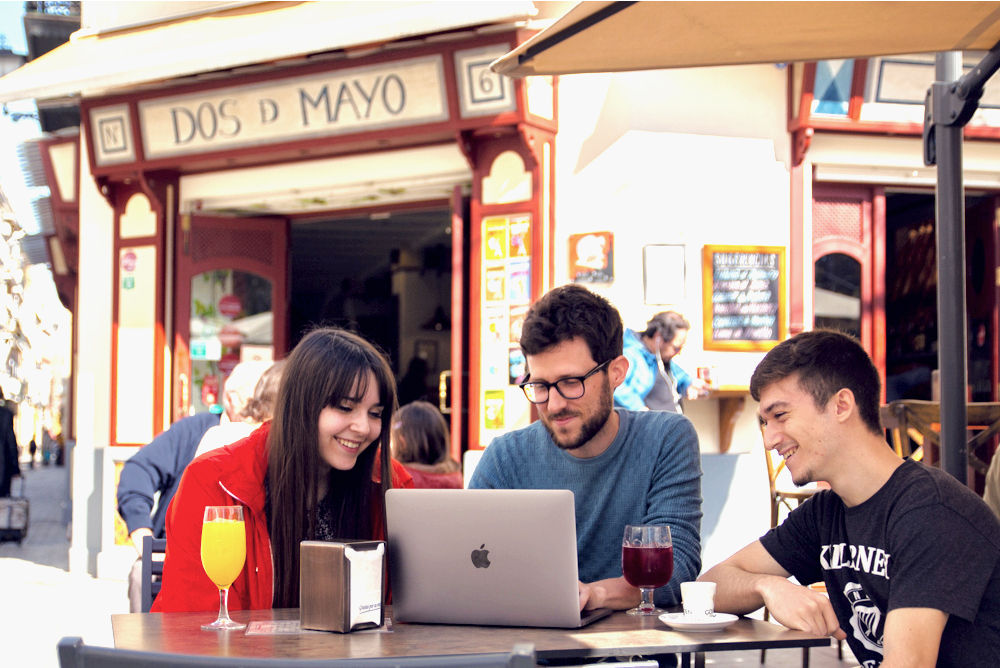 A colleague posts a thread on our Twitter account but ruins it with an incorrect mention. After laughing at her expense, we decided to tackle the problem by creating Sneak, a Chrome extension that warns users if they mistype a Twitter handle they mention.

There were only a few days left until Christmas, and you could feel the playful atmosphere in our studio. Clarisa, Head of Marketing at Z1, was writing remotely from home that morning. She had spent a good time meticulously preparing a new post for our Twitter account.

Journalists, community managers, editors… we all know it: A thread in this social network is like a bomb. Once you press the button, there is no way back. And a mistake can ruin you half morning of work. Not to mention getting made fun in the office and, most importantly, potentially making you look bad to a client.

One wrong letter made Clarisa mention the wrong person in her tweet. A while earlier, she had announced on Slack that her connection was slow. It was Ivan Coronado, our lab lead, who first noticed the mistake:

We didn’t have the answer, but the Z1's Lab found a solution

The experience of our coworker is familiar to anyone who posts to social networks. We didn’t have the answer to the question of when will Twitter allow tweets to be edited, but the Z1 Lab did found a solution. After a storm of jokes about Clarisa’s blunder and the deficiencies of Twitter, Iván came up with the idea:

And so the challenge began

In Z1 we are passionate about working side-by-side with our customers. When we have time, we also enjoy developing our own products. Created a year ago, the Z1 Lab enables us to test, play, and, above all, to help the developers and designers who are learning with us to advance their skills faster by working on more real projects.

This dynamic has led to experiences such as Draki Hero, an augmented reality video game that we developed to place ourselves at the forefront of augmented reality. It is one of the most promising technologies in the coming years.

On this occasion, it was about starting from a common user mistake to create a product that made users’ lives easier.

We called it Sneak, a Chrome extension that checks you are mentioning the right Twitter user — and not some other random user with a similar Twitter handle.

How does Sneak work?

Sneak solves a problem 130 million Twitter users face every day. Through an overlay on the tweet, the tool shows the basic information of the person mentioned (photo, account name and user) so that the author of the post can see if it is correct. Sneak also detects accounts that do not exist or are duplicated. It even marks your mistakes in red to make them impossible to miss!

Sneak solves a problem 130 million Twitter users face every day. It seems incredible, but there was nothing on the market like it

“It is essential that we all go through the Lab to live experiences before doing it with the client. And that we do it by generating products that have meaning within the market. If an entrepreneur asks us for a Chrome extension, we will already have valuable experience in this field that will let us handle this emerging technology with ease,” says Iván. For Iván, it’s vital that a studio like Z1 keeps up-to-date with each new technology in the market.

Iván entrusted the task of creating the product to Manuela González, a Software Engineering student who at that time had only been working with us for a few weeks.

“We are going to develop Sneak in three weeks,” Ivan said. “It is a joke, right?” they replied

Luis Adame, who had recently been an intern at Z1 and had just joined the team as a full stack web developer, would supervise the work. “We are going to do it in three weeks,” Ivan said. “It is a joke, right?” they replied. A while later, they had an assigned designer and the project underway. Manuela gritted her teeth and got to work.

Learning from the real world

This future engineer came to her career almost by chance; she wasn’t sure if she would like it or not. “I had a crisis; I didn’t feel motivated,” says Manuela. However, I was awarded an Erasmus in Holland, where they made me work hard and during which I became familiar with technologies we hadn’t covered the college, like React. “

Her experience in Amsterdam and learning about Architecture and Software Systems Integration made Manuela see that creating products from scratch was her main interest. When she arrived at Z1, the doubts that still remained vanished; she wanted to be a web developer.

As soon as she finished her training, Manuela took on a real project to complete her learning. “When I got stuck, my teammates guided me,” she says. “But it is important that they allow you to reach the solution, to make your own mistakes. In three months, I have advanced more than during the whole of university.”

When she arrived at Z1, the doubts that still remained vanished; she wanted to be a web developer

Ivan agrees: “It is vital that, beyond learning code, those who learn in our team acquire other skills. We try to let them do this and organize themselves to complete the work. On the other hand, I wanted to know if they could develop a product without me, leaving Luis in charge. Both have succeeded. He has confirmed that he knows how to manage a project, and she proved she could develop it. And most importantly, they have shown that they have initiative and creativity.”

On Luis’s first day at Z1, he had to assume the creation of an escape room that encompassed the entire city, a project that helped him become a React master. For him, the best thing about developing Sneak has been mentoring Manuela.

A few months before, he was in her position. Now, as part of the Z1 squad, he was in charge. “The best thing has been sharing knowledge with Manuela and she has done great, got involved and put a lot of interest in each of the tasks I assigned her. The fact that Sneak is now a reality confirms that the planning and distribution of work have been a success, which encourages me.”

“I did not imagine the world of work like that,” says Manuela with a smile “I have discovered that when I like something, I have no limits. Z1 offered me the opportunity to motivate myself and learn in an enjoyable environment. I am very proud of the result. It has been good for my curriculum, for my learning, but, above all, for my self-motivation and my self-confidence.“

"Z1 offered me the opportunity to motivate myself and learn in an enjoyable environment", Manuela said.

Among other projects, the Z1 Lab is currently working on improving and expanding Sneak’s functionalities, such as telling you if your chosen hashtag you are going to use really exists and how many people are talking about it.

Iván concludes: “The best thing about the product is that it works within Twitter itself, without the user having to modify their habits. Beyond its usefulness, these types of projects show that we are agile, that we adapt to the environment and seek solutions to any problem. We test everything with facts. If the product works, we will continue to explore the possibilities of improving it.”