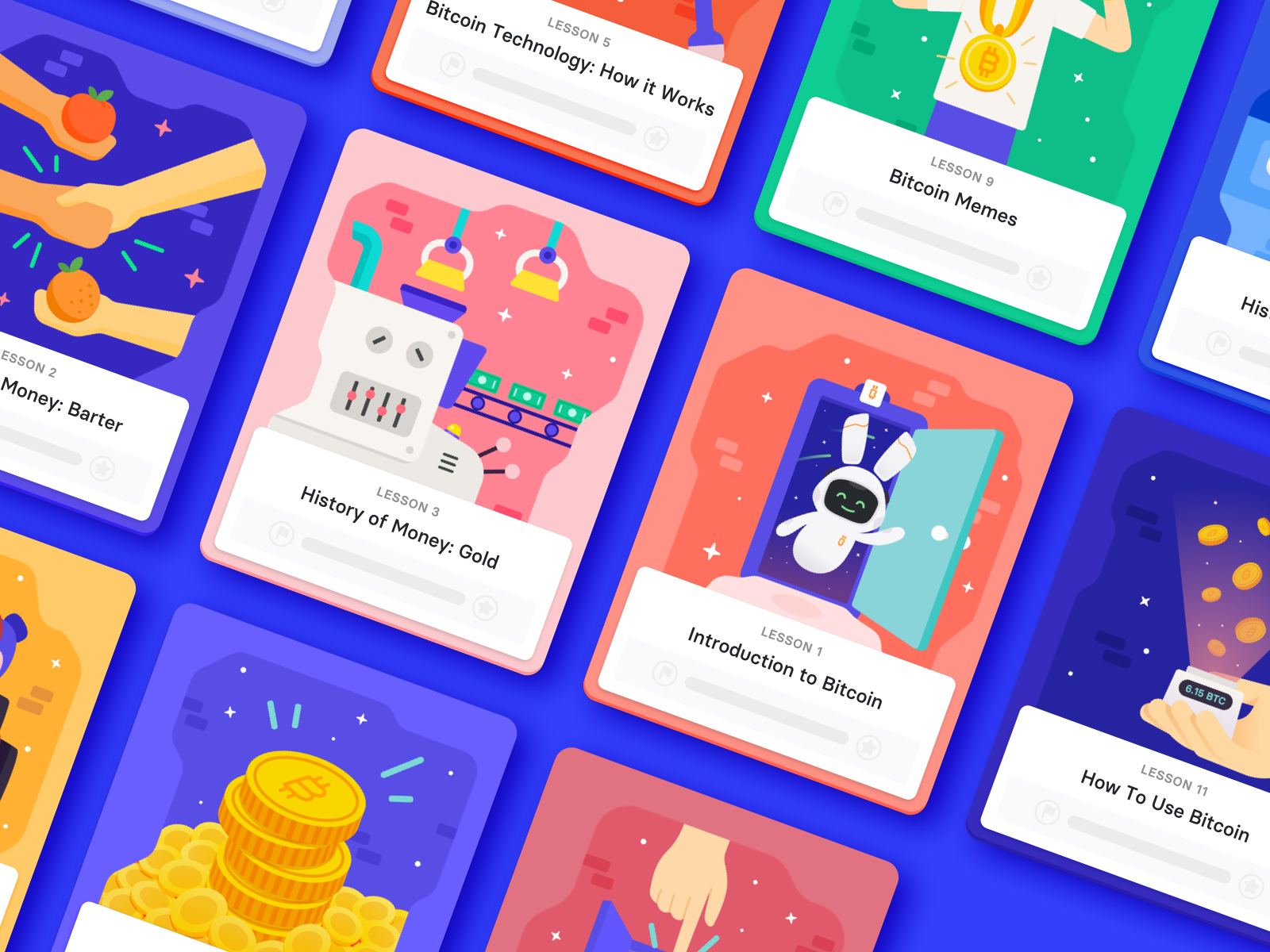 We partnered with an experienced entrepreneur to help him realize his vision for “Duolingo for Bitcoin” — a user-friendly, mobile bitcoin learning app. It’s a lesson in how to go from zero to one.

Gareth Stephens, Founder of Bitcoin Lessons, is one of those visionary entrepreneurs born to hustle and forge his own path. He launched his first website before he had his first real job. Even during a 13-year career building products for global companies, he always had a side project on the go. “Plan A was always my own company, Plan B was working for someone else,” recalls Gareth, whose Plan B would actually have been considered an excellent Plan A by many people.

He spent more than a dozen years with a global data intelligence firm, servicing large enterprises. One of the company’s early employees, Gareth progressed into a senior role in product management as the company’s value shot up to over $1 billion dollars and the team grew from 30 to over 1.000 employees. Although describing this position as his “corporate dream job”, he knew it wasn’t his forever job. “I did enjoy my past career, but it was originally just a stop-gap to raise funds for the next big idea,” Gareth recalls. “That thought never went away and many ideas came about over 13 years with the same company.“

During a 13-year career building products for global companies, Gareth always had a side project on the go

One of those ideas was sparked by a growing interest in Bitcoin — the cryptocurrency, or digital currency, that operates through a peer-to-peer network. It became the seed for Bitcoin Lessons.

By the time Gareth began developing an interest in Bitcoin around 2015, Bitcoin’s value had rapidly risen to over $400 since its launch in 2009. He very quickly went from casual observer into full-on Bitcoin enthusiast, travelling to events and meeting fellow enthusiasts who inspired what would become his new Plan A. “What was inspiring was that these people were passionate, and actually doing something about it,” says Gareth. “They were building Bitcoin businesses and I wanted to do the same.”

He decided to make the leap and said “goodbye” to the corporate world without a clear idea of his next step — beyond that it should be Bitcoin-related. In his exploration of opportunities in the Bitcoin market, it became clear that consumer education was still one of the biggest challenges in accessibility and adoption. Gareth realized that — even 10 years after Bitcoin was launched — many people simply still didn’t understand what bitcoin was and how it works.

With a long career in data intelligence behind him, Gareth decided to translate his strengths in dealing with both customers and technical people into a business. He’d found his big idea: Develop a way to make Bitcoin easy for the average person to understand. The concept for Bitcoin Lessons was born.

Having worked with both independent contractors and large companies with complex processes, Gareth wanted to find that sweet spot in the middle: a company large enough to have the talent and processes to help him, but still nimble and personal enough to work closely with him to bring his idea to life. He wanted an entrepreneurial partner, not just a service provider. For Z1, entrepreneurs like Gareth are our lifeblood.

“I was looking for a partnership that would last a long time and survive many iterations of the brief I had written,” explains Gareth. “I knew I wanted to build a lightweight company and so needed a great partner that could work with me and my co-founder in a seamless way as if we were working for the same company.” Gareth undertook an exhaustive search, spanning 30 agencies, to find the right mix of technical skill and quality relationship. “I must have spoken to 30 agencies in total, at least. Some didn’t want to work with me as they viewed a start-up as too high risk,” says Gareth.

Z1 takes the opposite approach. Entrepreneurs and founders like Gareth are our lifeblood. Michelle Reid, Head of Partnerships at Z1, recalls the first discussion about what would become Bitcoin Lessons: “One of the things I love most about my role with Z1 is the variety of product ideas that come our way, and the opportunity to meet creative, passionate people full of hustle”.

“While I’ve explored lots of early ideas around cryptocurrency, Gareth’s vision was to deliver clear value to users, in a meaningful way," points out Michelle. "Culturally, we were completely aligned and thrilled to plan the ideal partnership to support Gareth’s vision.”

A lesson in going from zero to one

Gareth arrived at Z1’s door with ideas, a brief, and even mockups. However, there was a lot of work still to do. Gareth’s initial idea for a Bitcoin education app had morphed into more of a game than a provider of educational content it needed to be. He didn’t know how to fix it. Luckily, the Z1 product team did. Through a collaborative approach, the team focused on exceptional interactions around the core functionality: the learning lessons.

“Gareth had some clear ideas about the purpose of the product,” says Héctor Giner, Z1 CEO and co-founder. “But he needed help with how to design and craft an engaging experience for mobile elearning.

The Z1 team followed our iterative process of exploration, benchmarking, decision, and prototyping

The Z1 team followed our iterative process of exploration, benchmarking, decision, and prototyping. Here’s an inside look at what we did:

The proof is in the results

The final Bitcoin Lessons app offers a mobile-based bite-sized learning approach similar to popular language app Duolingo. The app is designed for those with an appetite for knowledge, and can be used in short bursts to suit busy lives. It currently contains 11 lessons — from the history of where Bitcoin came from and how it compares to previous forms of money, to the strengths and weaknesses of Bitcoin and what the future may hold, to how to venture into the world of Bitcoin with knowledge and confidence. Its unique concept also allows users to earn Bitcoin as they go to incentivize lesson completion.

The app officially launched in February 2020, available for download for iOS and Android in the Apple App Store and Google Play Store. It hit 1,500 users in just the first week. Its popularity continues to rise as those currently self-isolating globally look for easily accessible educational resources.

We were surprised to learn that early downloads on Android have come from some of the most financially poor countries in the world, such as Venezuela, accounting for 16% of the downloads. Venezuela’s inflation rate has skyrocketed 53 million percent since 2016 with nine out of 10 people trapped in poverty. This could explain their curiosity for learning about Bitcoin.

“Feedback from the Bitcoin community has been amazing, and people have been hugely positive about Bitcoin Lessons,” says Gareth. “Bitcoin is an unforgiving space where people speak their minds, so to be so widely accepted into the fold has been great.”

Emilio Sánchez, Z1’s CTO, reflects: “It was really cool working with Gareth. He was always available to give us feedback about the app and he understood that there are certain things in development that take time and shouldn’t be rushed.”

“Everyone we worked with was awesome and worked extremely hard,” says Gareth. “Your version 1 can make or break your company so you need a partner on your side that gives you the best chance of success.”

The process we used with Gareth and Bitcoin Lessons is how we’ve taken many products from zero to one over the years. We’d love to hear about your next big idea.